Re: worried about Colin (again) [updated: no longer worried]

amskeptic wrote:For such a horrid life, that full moonlit drive through the mountains of Montana was amazingly gorgeous. We wafted along the highway in and out of the cool shadows of the peaks, our taillights a phosphorescent display of the pulse of civilization.

The moonlit drives through the foothills north of Los Angeles last night and tonight have been simply Divine. It's hard to find words to justify why I drove four times the distance required in six times the duration, but one look out the windshield and even if you did have words, they would be forgotten.
1969 bus, "Buddy."
145k miles with me.
322k miles on Earth.
Top

Re: worried about Colin (again)

tewa3240 wrote:I always wondered what would happen if one kept driving across the country in an antique bus, repairing antique buses parked across
the country. Alternator got ya, but it WAS whispering before it got you!

Whispering? Yowling. Piteously. For weeks, it was just a little whistle early in the morning. I thought it was the auxiliary air regulator playing flute. The sound stopped reliably within three minutes of a cold start. The last day, however, it was singing constantly . . .

Here's the thing. I was brazenly confident in this bus because of the memory of the Road Warrior's astonishing 419,000 miles on its original alternator. This junky new '78 was not made of the same stuff! This bearing seized due to what I believe was an inadequate initial charge of lubricant:

The yowling was from the shell of the bearing (still stuck on the rotor) spinning in the housing that it once was pressed into. The brushes got hateful from what, severe dusty conditions? I did 26 years of dirt roads with the Road Warrior.The slip ring diameter of this alternator was not even close to the minimum 31.5mm:

Re: worried about Colin (again)

BellePlaine wrote:The 13th is just fine by me, better even.

The morning started off with an extended discussion among the adults in the house about hospital birth (our first daughter) vs. home birth (our second daughter). Details were shared, eggs were eaten, coffee was dranken. Drank. Drinked.

Ludwig's old fuel pump, one of those boxy CLACKITYCLACKCLACKITYCLICKCLACK types, fell off its perch toward the end of our last trip. Luckily I had a spare whirrrrzwhirrrrywhirrwhirrz pump, which after some contemplation we mounted high up in the crook where the rear seatbelts mount, except, you know, on the outside of the car. Someone (unclear who) mounted one of the fuel filters backward, which provided necessary comic relief (especially since we'd just been over that). 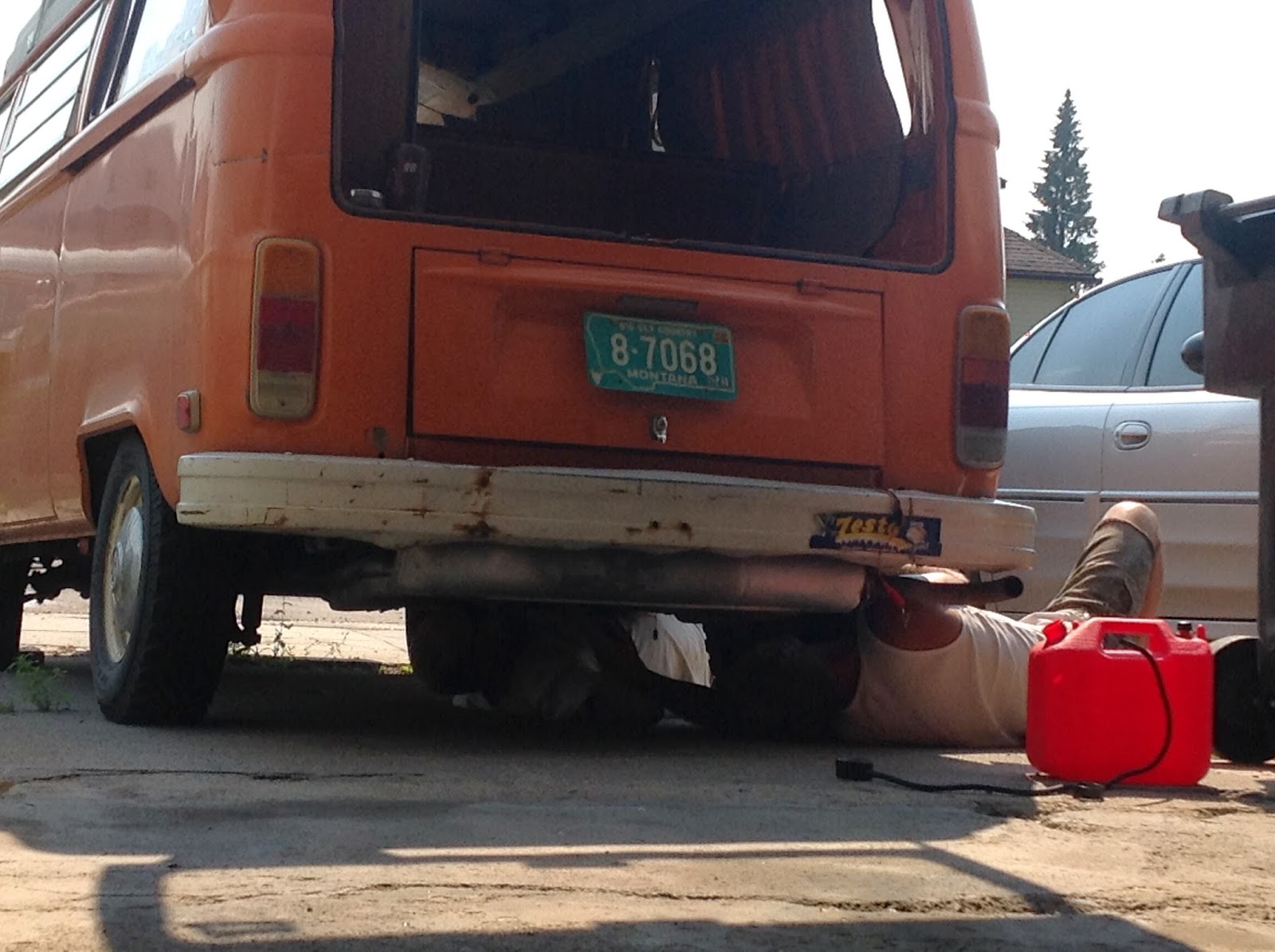 We had to use two fuel filters, actually, because the nipples on the pump are too big for the hose that runs from the tank, and to the carbs. So it goes 5mm out of the tank to filter A, big 'Mrcn hose from filter A to pump, big 'Mrcn hose from pump to filter B, 5mm out of filter B to carbs. Okay.
Love that new pump sound. That is, lack of sound.
Along with the new pump, we installed a relay such that the pump only runs when the engine runs, and not merely when the key is on as it had been before. Being morbid, I like the idea that after I roll the damn thing, as I lose consciousness my thought will be "at least the pump isn't still pumping gas all over the kids in the back seat". Yeah, that's how my mind works.

An unresolved mystery is why the heater tube on the passenger side was half melted but there was no evidence of fire. Scary stuff. (Sorry, no picture.) 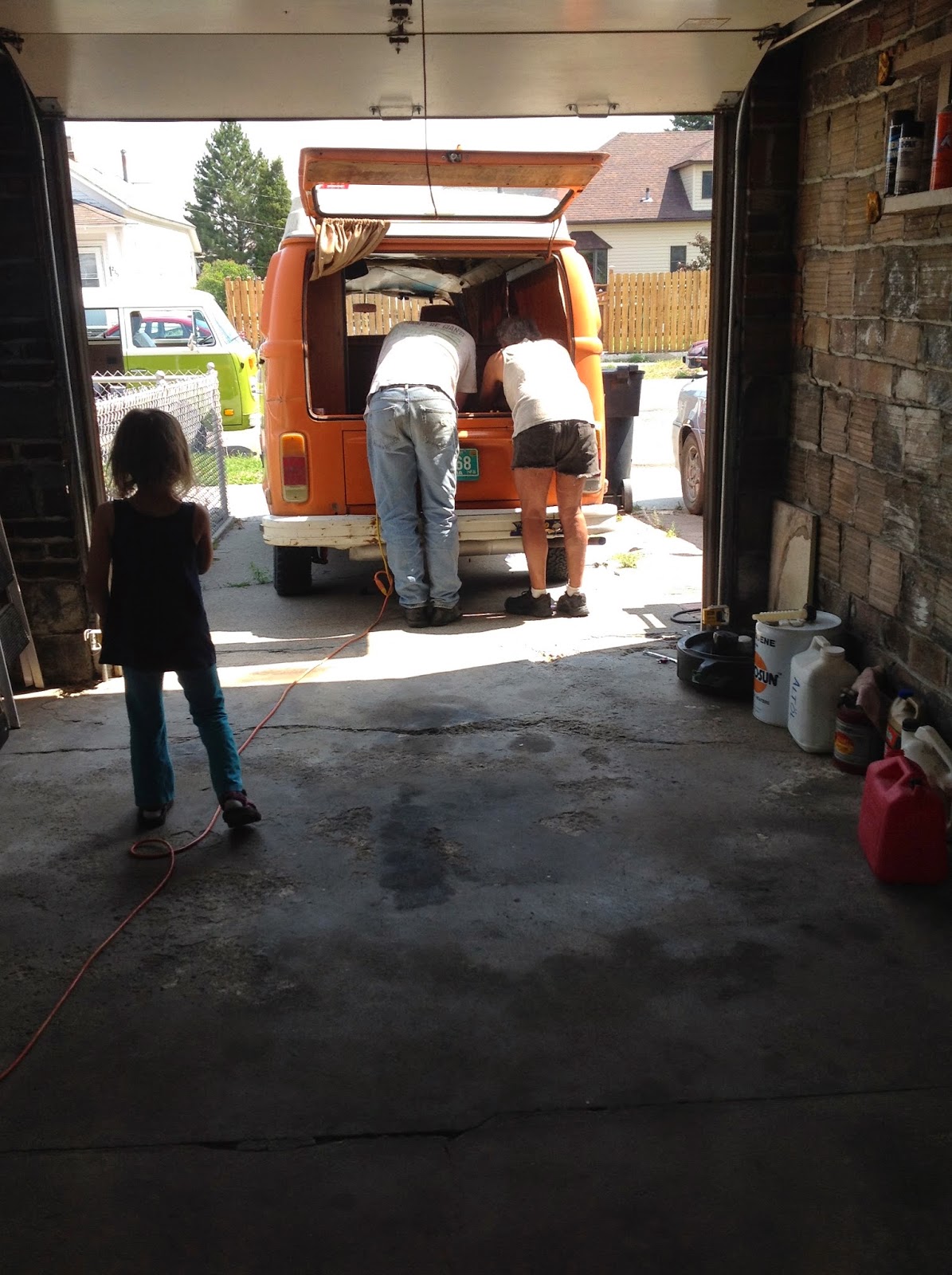 We moved on to some minor carb tuning, mostly to accommodate the lack of a working brake booster (I still have one Satchmo graciously gave me and which I ungraciously have yet to install). We also green loctited all three solenoids to the carbs, as they were having backing out issues. 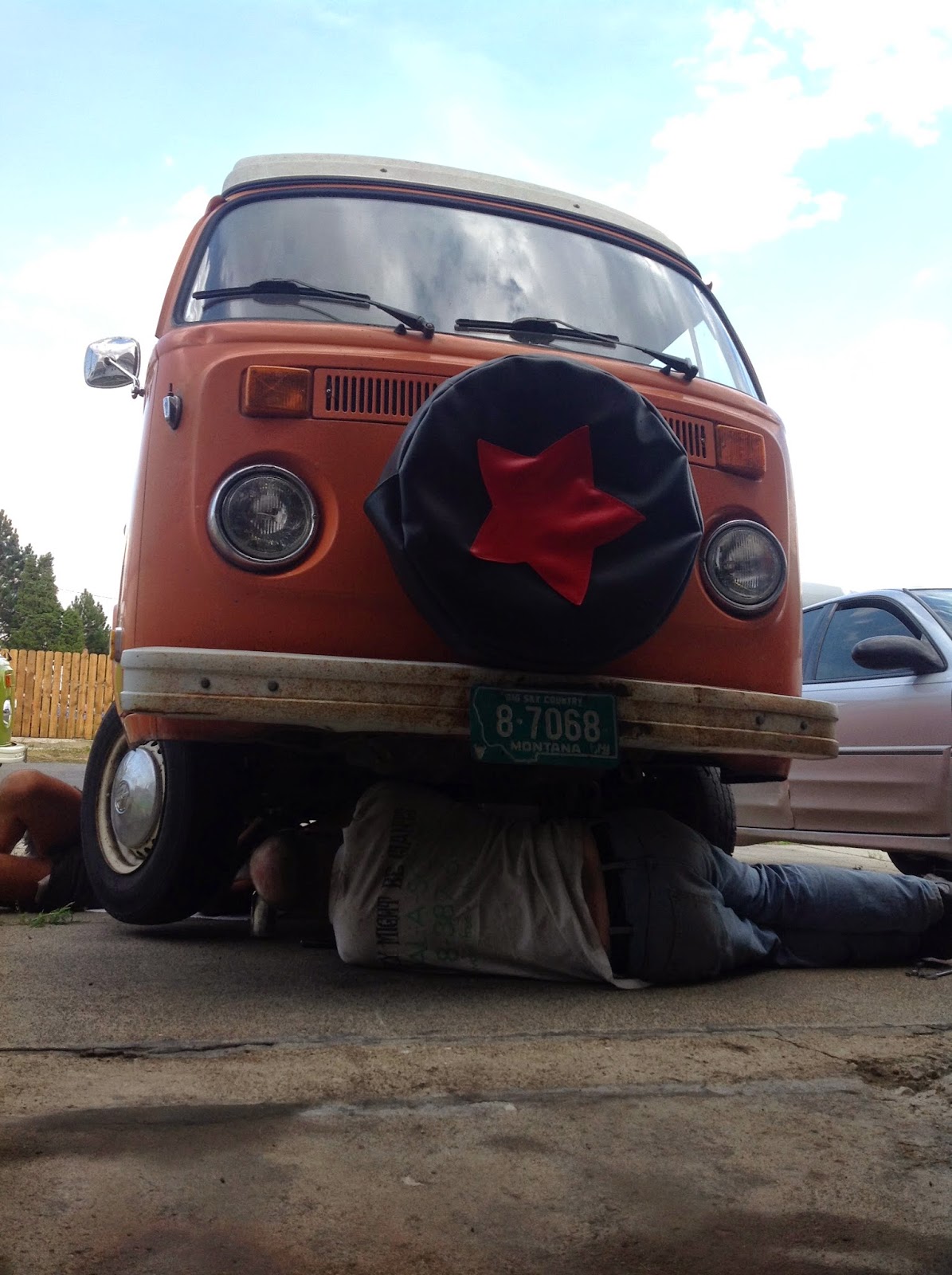 Lastly we did a cursory investigation of the brake lights' anomalous behavior. Headlights off, everything's copacetic. Headlights on, and on the pass. side the parking light and reverse lights light up, dimly. Time was short and I have to do things myself anyway, so I got Colin's best diagnosis.

And then a little after 7, I think, he made his way toward Minnesota--with us, he's always coming from or going to Minnesota.
Ludwig--1974 Westfalia, 2.0L (GD035193), Solex 34PDSIT-2/3 carburetors.
Gertie--1971 Squareback, 1600cc with Bosch D-Jetronic fuel injection from a '72 (E brain).
Read about their adventures:
http://www.ludwigandgertie.blogspot.com
Top

lovely, all-too-brief glimpses of small-town Montana. Yours is glorious country, sir. Now, ahem... keep to bus and diagnose those electrical issues. Easy to do with patience and a decent voltmeter.

I wonder if Colin's alternator was still under warranty?
79 VW Bus
Top

It sits in pieces in the back of the BobD, just above Silty The AutoCrossed Alternator. Its diode plate shall be harvested as the need arises. So shall the other bearing which is FINE. So may the stator, who knows what the future may throw my way when it comes to failure.
Ridiculously, the utterly mangled pulley, the yanked and bent and beaten and viciously filed pulley, just spins away imperturbably back there, it has given the belt no grief in the past two thousand miles.
Last night, Silty reminded me that it has had a life long before I met it, the headlamps did a dizzy dimming deal that spontaneously cleared up. We're all on probation here in the BobD . . .
Colin
BobD - 78 Bus . . . 112,730 miles
Chloe - 70 bus . . . 206,865 miles
Naranja - 77 Westy . . . 132,040 miles
Pluck - 1973 Squareback . . . . . . 55,570 miles
Alexus - 91 Lexus LS400 . . . 94,225 miles
Top